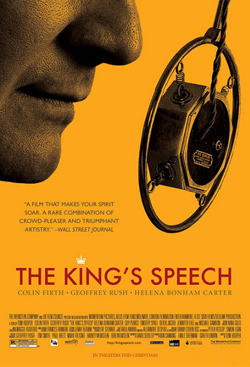 Bethany and I don’t get out too often to see movies these days, but when we do we like to make sure we’re seeing something we’re going to like. When I saw the trailer for The King’s Speech I knew we would have to see it, and last night we finally did.

If I can use a British word, the film is brilliant. The story is heart warming and genuine, the nineteen twenties era is spot on, and the acting is some of the best I’ve seen. During the opening shot of the microphone I turned to Bethany and said, “I already like it”. From a cinematography standpoint it’s just a beautiful film. The production is high quality and they absolutely nailed the era of England in the twenties. Basically, it’s a film about two things: fear and friendship. I won’t give any spoilers away, but the IMDB description sums the film up this way, “The story of King George VI of Britain, his impromptu ascension to the throne and the speech therapist who helped the unsure monarch become worthy of it.” That’s a very fair explanation, but in no way is this a boring English movie. Colin Firth (King George VI) and Geoffrey Rush (the speech therapist, Lionel) are both just incredible in this movie, and the way their friendship is established is both funny and heart warming. Bethany and I talked about it the whole way home from the theater (which was about 20 miles away because it’s not playing everywhere) and we just couldn’t get over the characters and the nuances of each person. Needless to say, we highly recommend the movie. Yes, we know it’s rated R, and without getting in to how I feel about the useless rating system, I can say that if you’re an adult you can see this movie without any real awkwardness. It’s rated R for language, but I’m telling you that even the very few (about two) sections of language are actually quite funny. Though I don’t condone the use of poor language, I can honestly say I was laughing…a lot.

There are few movies that come out that I clap at the end, and this was one of them. If you’ve been waiting for a great movie to come out that you can catch, this is the one. Like I said, it’s a story about fear and friendship and if those concepts don’t capture your heart then you’re probably not living too well. Go see it–it won’t disappoint.