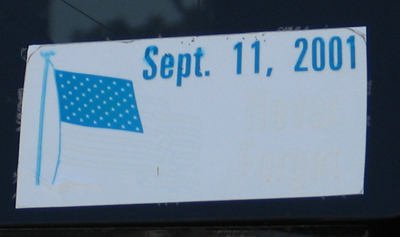 I saw this on someone’s car today. I took the pic because of how intense it really is. The reason why you can’t see the flag is because it got faded. I mean, its just we’re supposed to remember what happened, yet it’s kind of fading. It’s not as intense as the first year where there was a ton of media attention at ground zero. Now the hurricane has become the greater news. I’m not saying that’s a bad thing, it’s just the facts. The fact is, I grew up in America. The next best thing has already happened. I mean “best thing” to say that something greater has come. Maybe it’s just that time has passed. I don’t know. But it’s getting late. Let’s talk about something else.

I bought a new cell phone the other day. Got one of the Razr phone’s from Cingular. I like it.
School has been going well. Just started a few weeks ago. Not stoked on it, but it’s going.

Furthermore, I’m changing shaycam.com in the next 10 days. It’s going to be shayandbethany.com from now on. She’ll probably be posting at times, but I’ll still write in, don’t worry about that. I guess when you become one as a couple you also become one as a website. I’ll see you kids on the flipside.