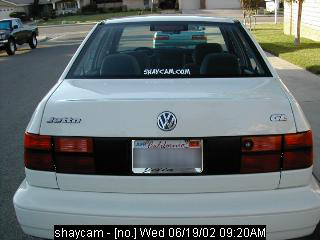 WHEW! A break in the action. These past few days have been amazing so let me tell you kids about them. I also wanted to apologize for those returning cam watchers who were sad that I didn’t post an earlier journal. Sorry kids.. but read on..

Ok, so we all know that my last journal was all about graduation. Yeah, so graduation is fun and all, but I think I would be safe to say that it’s not like the “coolest thing in the world” like everyone was talking. It’s just, I don’t know, traditional. That’s all. But we did our ceremony, and two of my friends and I did our song, and it was good. But that wasn’t the best part. When we were walking out of the ceremony my mom came and met me in the parking lot and told me to wait around for a bit. So I did until finally my dad and another friend of mine came. They gave me a box to open and inside was a Volkswagen T-Shirt. Then there was a smaller box that contained a key chain. I really didn’t understand at that point until my friend standing there told me to try the shirt on. When I lifted the shirt from the bottom of the box there was a set of JETTA KEYS! I GOT A FREAKIN’ JETTA FOR GRADUATION!!! Isn’t that the coolest?!?! So, that was amazing. Seriously, I love that car, it’s what I’ve always wanted. It’s a 98, Jetta GL. Oh man, it’s a manual, and it’s baaaaaaaaaaaaaaaaaaaaaad. I love it. So that night we hung out for a long time at this party, then we went to a friends house and hung out and in the end it was a good night!

But that was Thursday. Saturday was my 18th BDAY! My friends stole me on Friday night so we could celebrate my birthday! They got me like 18 different gifts, which were all very rockin’! Tons of things from orange juice to a worship leader magazine. It was rad. Then they took me to dinner at this place that we are going to more often now called EZ Take Out. It’s a fun place, hamburger joint. But one of the best gifts was the one you are seeing the picture at the right, no not the car, but the sticker in the window. If you can’t see that it says “shaycam.com!” isn’t that rad? I love it, thanks everyone!

So anyways, just when I thought the surprises would stop, they didn’t. Monday (the 17th) my friend Zach asked me if I wanted to go hang out and stuff, so I did and we saw Episode II for the first time and it was good. Well, in the middle of that our friends call and are like “hey do you guys want to come over and swim.” And we’re like “sure, sounds good, be there in a bit.” So we go eat at McDonald’s and then go to our house’s and get our board shorts and head over. But when we got there, I walked in, went down the hall of my friends house, and SSSSSUUUPPPRRIIIIISSSEEEEEEEEEEE!!!! They threw me a surprise party! It was awesome! We had so much fun! I have awesome friends don’t I? Ok, that’s a lot of stuff. Talk to you kids later!