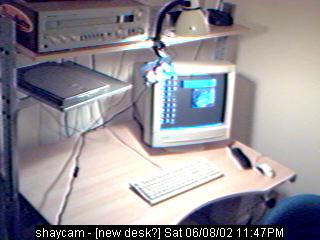 So, who would of that you get tons of new, free stuff when you graduate. Not to mention the fact that my 18th birthday is only 2 days after graduation! It’s great, so check out my graduation present! I love it, it’s a new desk, it’s good.

We drove down to Burbank and picked it up today. It’s a nice new desk, a lot smaller than my other one which is really nice. Plus, it has these cool feature likes a swivel shelf thingy, and a spot to hold my computer on the side, near the bottom. It’s way cool!

Anyways, yesterday I took my second to last test of my entire high school life. I took my English final, which was surprisingly easy thanks to my friends Kira and Zach, who helped me study! We had a good time! Well, the way I worded that makes it kind of sound like they helped me cheat, but that’s completely false. So don’t go off tellin’ people lies about me! uh?.. After the final a bunch of us went over and ate breakfast at Denny’s, it was fun too! Then after that there was a yearbook signing party at my school and I know that there were a ton of memories made there.. it’s getting all sad now.. everyone’s going there separate ways, everyone’s calming down. I don’t know, it’s just sad. I guess that’s the only way I can describe it. After the yearbook thing, a few of us headed over to my friend Sara’s house and we partied down! We cooked hot dogs, and drank soda, and had a POOL PARTY! It was a blast! I hung out there ALL day! Totally fun, thanks Sara!

Well, I guess that’s my life. I gotta get up early tomorrow for worship team at church and then write some more stuff in a yearbook. Yearbook is kind of a good band name? Maybe someone has it? I don’t know.. weird. bye now.