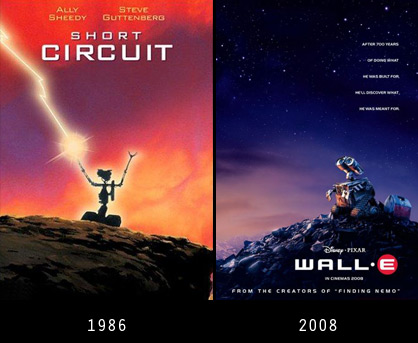 Ever since I was a child I have had this strange fascination and love for the movie “Short Circuit” (pictured above, left). It’s a story about a robot that was designed for combat who gets a “short circuit” and starts to believe that he is alive. He even names himself Jonny Five. Five being his number of the few robots that were made and Jonny coming from some 80’s song that goes, “Who is-who-who is Who’s Johnny? She said and smiled in her special way” (I think the song is “Who’s Jonny” by Debarge). There isn’t much more to the story line than that. I think my love for it also comes from the fact that I actually met Ally Sheedy, the main actress when I was like 8 years old. Anyways, it’s one of my favorites.

But I was intrigued a few weeks back when I saw the trailer for “Wall*E”. Apparently it’s another story about a robot who has a very similar look a feel that Jonny 5 had. Their resemblance does make me very happy I might add. I’m actually really excited about this film. Not only does it have the magic of Disney and Pixar, but it’s as if my friend Jonny Five has come back from a 20 year break. All I’m saying is I like the idea of another great robot movie. And remember, when “Wall*E” becomes the next big film and everyone loves robots, I’ll be the one who has always been a true fan.

One reply on “Robots and Me”

[…] favorite robot and mine returning to the big screen. Oh, and one more thing — let’s not forget what I said about Disney’s Wall-E looking strikingly similar to our goo… I guess there’s nothing new under […]