It’s our first day in Hawaii and we’re having a great time hanging at our friend’s place right here in Oahu. I’ve never been to Hawaii before and one thing I’m realizing is that no one has ever really told me how this place smells. It’s fantastic. So clean, so fresh, and kind of sweet smelling.

Alright, here’s some photos from the first part of our day today. It’s only 3:50pm right now so there’s plenty of time left for more shots, so hopefully more to come. Photo captions are below each shot. Here’s our legit, REAL leis that Megan greeted us with at the airport. The smell nice, and they make the whole room smell good. Bethany’s is on the left and mine is on the right. Just a quick shot of Bethany and Titus, my two favorite people. A shot of our friend’s daughter. She’s fun. Titus with my lei on. Our friend’s son with his “Automoblox”. They’re like the legos of cars or something. I’m way too stupid to understand it. Christmas Tree 2010 from Shay on Vimeo. 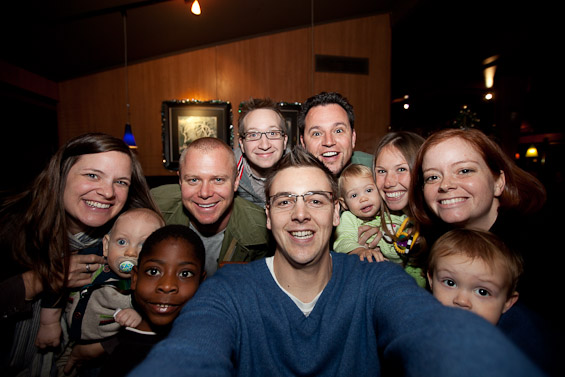 A long week came came to a close tonight with the above photo. Hands down it was the hardest night I’ve had a in while — surprisingly hard. We all look happy, and we are, but just a few minutes later everyone in this photo had tears in their eyes (minus the babies). Happy hearts turned to bummed hearts because we had to say goodbye to one of the families. Due to a great new job opportunity for the husband, the Lord has willed that they move across the country. We really don’t know if they will every move back to California or what the Lord would have, all we know is that tonight would be the last night we would really see them for a while.

I actually didn’t think saying goodbye to them would prove to be so difficult. It’s not that we haven’t known for months what God’s plan was. We even made arrangements to spend the last four days with them, just to get our time in. And it’s not that we don’t trust God’s sovereignty, because I believe we all do. The truth is we are friends, and in many ways we are closer to these people than our families. We have grown together, laughed together, worshiped together, camped together, ministered together, and enjoyed our families together. These are the kinds of people you let watch your kids, and you do the same for them. They are kind of people you give your house key to, and the ones that loan you their truck when you’re moving across town. They are ones that let you live in their place for six months before you get married (rent free) just because they want to bless you. They are the ones that open their home up once a week so a college-aged Bible study has a place to meet, complete with freshly baked chocolate chip cookies. They are ones that invite you over to watch the World Cup and cook bacon wrapped hot dogs. They are the friends who you share struggles with, joys with, and the unknown with. They’re the ones you ask to pray for you and know they will. They are friends who love God and love people, and the kind of people you want to be around. That’s why it was so hard.

I don’t know what the future holds for my friends, but I know that I can’t be selfish with them. I’m sure there are other people across the country who need them and maybe God has sovereignly moved them just for that? Sad or not, I have to be OK with God’s plan. I need to learn more and more to trust Him even when it’s hard. I hope and pray God will use these good friends in their new home and new community to bless others the same way He has used them to bless me.