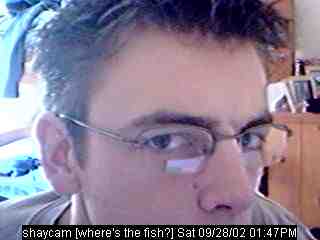 I guess I feel it necessary for people to read the definition of the word “drama”. I don’t know about you kids, but if you have ever had any time in the educational system, you will find there is much “drama” that goes on. It all starts when Suzy takes Jane’s barbie on the playground. Later, Suzy starts to talk bad about Jane and she finds out and tells her friend to go tell Suzy that she is dumb. Suzy of course gets mad and “steals” Jane’s boyfriend, and that opens up a whole new aspect to what we like to call “drama.”

Here’s my definition: drama - pointless banter. stupid actions. basically what the definition of high school should be.
haha. I make myself laugh.

So, let’s just review. Once upon a time I made a website. I wrote cool crap in it and just happend to have a guestbook for people to come and say hi to me and just pretty much, well say hi and stuff. Then someone, who is un-named, who might even be a friend of mine, decides to “share” their thoughts. Which, honestly didn’t bother me at first. Then I thought and thought and thought about it, and I realized, “.. hey, this is my site, and my guestbook is not for this.. maybe if it was like a message board or something.. that would be cool, but man, I don’t want this stuff on my site..” So I decided to take some corrective action to fix the problem. That, which I didn’t know would happen, opened up a whooooooole lotta D R A M A ! I don’t like drama. So, people, lets just relax. haha.. Can you kids feel me on this one? I mean seriously, if you want to talk to me about something, then email me. I check it every day! I’ll write you back! But all this started as a simple little thing, and now, somehow, it’s this huge MOUNTAIN OF DRAMATIC ISSUES!!! I think it’s funny personally. But, hey, watch this… Email me your thoughts kids. Maybe we can turn this whole thing around!