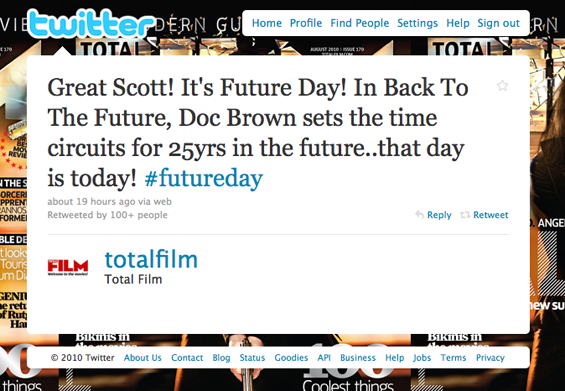 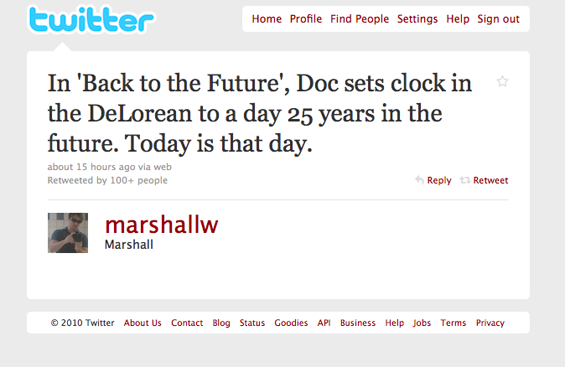 To be perfectly clear, it’s my sheer nerd love for Back to the Future that I even write about this, but I knew I would have to say something once I got to the whole story. Let me explain.

I was wondering through my Twitter account today when I noticed a few “retweets” from my friends. For non-Twitter types, this is basically a tweet that has been copied and re-posted to other people’s accounts. Think of it as a “repeat” tweet if you will. As I casually read, I saw a couple tweets that stuck out. They were both referencing a statement about Back to the Future that I later traced back to some film site and some other dude — the tweets are shown above. If you’re a fan of Back to the Future and know your facts, you realize that this has 2 major errors in it.

Second, the date they needed is really in October…2015.

The question could be asked “where did they get the 25 years from?” Well, it’s the 25th anniversary of the film this year and they just announced a release of the trilogy on Blu-Ray. I’m assuming that’s it?

1. If you work for a magazine and are going to post a tweet about a trilogy that has a large following of people that have spent too much of their lives figuring out the time line of Back to the Future — get your facts straight.

2. If you’re going to ReTweet something, give it a once over just to make sure.

3. Both of these people are idiots. Comes from upbringing. Their parents are probably idiots too.

4. Back to the Future fans are definitely cooler than Trekkies, but they don’t joke around about their facts.

5. You are already bored by this blog.

6. You could care less what day Doc went in to the future, you are just laughing at someone eles’s mistake.

7. You really want hover board and are sad they don’t exist.

8. You still think Marty was smart when he tried to buy that Almanac in 2015 so he could go back in time and “put some money on the Cubbies”.

9. You are actually a little more interested in this blog at the moment.

10. We both wish that our lights came on at home when we say: “lights on”

12. Things are very heavy in the future. It has something to do with the earth’s gravitational pull.

13. Whenever you see 88mph you should get a little excited inside.

15. Having information about the future can have disastrous consequences, even if you’re intentions are good. Didn’t these people actually watch the movie?!