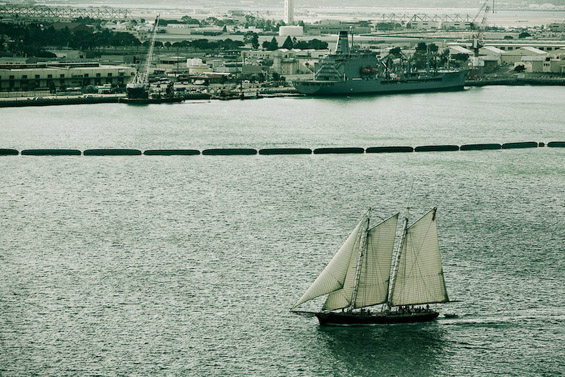 Ever since she went “missing” in the Indian ocean, I can’t help but keep up with the story about Abby Sunderland — the 16 year old girl trying to circumnavigate the world in her sail boat. If you’ve followed the story (or heard the news), you know she was basically a little over half way in her voyage when her boat was crippled by rough water and winds. Thankfully, she was equipped with location devices which she manually set off when her mast was destroyed and she laid in wait for rescue. The nearest boat to her was over 400 miles away, but Australian search teams did a fly-by and were able to contact her via radio to confirm she was OK. After about 40 hours of bobbing in the middle the ocean, a French fishing boat was able to rescue her while leaving her crippled boat behind to presumably sink. But however amazing and incredible the story already is, I think it’s just the beginning.

The tide has turned (so to speak) in this saga, and it’s headed straight for Abby’s parents. People everywhere want to know one thing: why would they let a 16-year old girl sail around the world alone? A few years ago they let their son Zac Sunderland attempt the exact same feat which he completed in mid-2009. Zac was 17 years old when he finished and it took him 13 months to make it around the globe. Abby, a year younger and maybe not as experienced as Zac, has now abandoned her quest and it was a dangerous voyage. But I have yet to find an article regarding Zac’s successful trip and blaming his parents for letting him complete the task. Were their parents doing the right thing then by letting him go and now they are to blame for Abby’s failed attempt? — I think not. The problem is not the Sunderland family’s parenting model, it’s everyone else’s.

We’ve long forgotten the days when “adolescence” didn’t exist — that is, this weird time our culture has created between childhood and adulthood. It’s a scary place where teenagers have little to no responsibility and learn to remain in childhood until they are at least 18 and then they’re allowed to venture out on their own. Newt Gingrich wrote a very interesting article in 2008 titled “Let’s End Adolescence” in which he basically gives proof for the failure of this “social experience” we call adolescence. As well he gives examples of young people who accomplished great things with their lives. He writes,

Benjamin Franklin was an example of this kind of young adulthood. At age 13, Franklin finished school in Boston, was apprenticed to his brother, a printer and publisher, and moved immediately into adulthood.

John Quincy Adams attended Leiden University in Holland at 13 and at 14 was employed as secretary and interpreter by the American Ambassador to Russia. At 16 he was secretary to the U.S. delegation during the negotiations with Britain that ended the Revolution.

Daniel Boone got his first rifle at 12, was an expert hunter at 13, and at 15 made a yearlong trek through the wilderness to begin his career as America’s most famous explorer. The list goes on and on.

That’s why the problem is everyone else. The culture we have created in America doesn’t want young people to go out and do hard things anymore. They’re either “too young”, “too inexperienced”, or any number of excuses we have created for them and there are no longer any expectations on them. The Sunderland family believes that young people have more to offer and they live by that. They understand that young people weren’t designed to sit around and play video games. They’re not here to just be a drain on our economy as the media teaches them to consume, consume, consume. Just because Abby didn’t make it around the globe in her boat doesn’t mean she failed. It means she tried to raise the bar for young people and call them to do something greater with their lives, and just because she didn’t finish doesn’t mean her effort wasn’t worth it. It’s also a call to parents to really look at the bigger picture here and realize that their kids are ready and able to do more than our weak culture thinks they can do. They are ready to be challenged with more than we are offering. They just need a little help from us.

For further reading:
Abby’s blog
“Abby Sunderland Makes it Home” - The Rebelution
Do Hard Things: A Teenage Rebellion Against Low Expectations by Alex and Brett Harris

2 replies on “Why I Keep Reading About Abby”

If she had made it, she would be praised for her courage and her parents for raising someone capable of doing that.

Couldn’t agree with you more on what you said about adolescence, Shay. Christian and I have often had discussions on the youth of our day, not only because we work with them, but because we see how our culture has succumbed to this idea that you don’t really “grow up” till you’re done with college. Even then it’s debatable…
Love 1 Tim 4:12 for the very reason that it doesn’t allow our culture to give us an excuse.