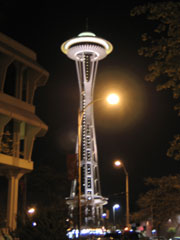 This past weekend was on the best weekends of my life. And you’ll know why as you read..

I went to Washington state this weekend to be with Bethany and her family because her grandfather passed away. It sounds bad, but it was really good to be with and the family and just support Bethany during this time.

But we had some extra time after all the services and the weekend so I set up a date with her in Seattle on Monday night. But what you don’t know is that I have had the ring for about a week and a half, and I have had the money for about a month and a half. (How did I get the money you ask? — > Long story short, I basically got a check in the mail from a previous job that I had. It was serious God’s provision). Anyways, Bethany’s parents dropped us off at the waterfront in Seattle and we said our goodbyes to them and they we were off to Starbucks on the pier to have coffee. (what Bethany didn’t know was that I had already talked to her parents and they were actually going to hang around Seattle until I call them). So after we got a our coffee we started walking down the waterfront I told Bethany that we should go sit on the dock by the Seattle Aquarium. Then we sat down on a table, and we were all alone because it was around 9:00pm and no one was on the streets on a Monday night. Then I asked her what she wanted to talk about, and she kindly replied “You…” So I said, “What if I told you I loved you?” (which was the first time I have told her that) and she just kind of gasped and looked at me.. and then I said, “And what if I did this?…” and I knelt down on one knee and said, “Will you marry me?”

Basically, it was like the shock factor for Bethany. I have basically been making her think that engagement was a long ways off, but I pulled out a sneaky trick. :). Then she told me to stand up and said “YES!” 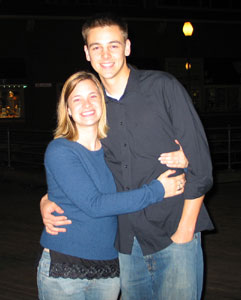 It was so much fun. And after I hugged her and kissed her, we called her parents and they came over to us and they took the picture you see of us here.

After everyone left we went over to the “Old Spaghetti Factory” and had a nice dinner by ourselves. Then we walked over to the Space Needle and hung out around there.

It was so much fun. And now we’re looking forward to getting married some time in August. We’re not exactly sure of the date right now, but we’re talking through it.

You can continue to pray for us as God grows us in our relationship and that we would continue to pursue Christ as we pursue each other.

look at that rock!! 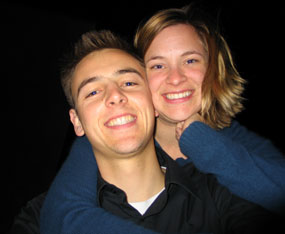 She’s the best. I love her.

5 replies on “Sorry.. I Had A Prior Engagement”

Sherman you the man! Like I said before I am just overjoyed for the both of you. Here is to all the wonderful and amazing things God has planned for you in the future.

Sherman - I love you. Bethany - I liked you from the very first moment I met you.

Congrats and many blessings,
Abe

Long time no see or talk, BUT I AM THRILLD FOR YOU!!! You have no idea how happy and proud, and just generally excited that you have found the woman of your dreams. I pray regularly for you, and several other guys from school, and I am blessed to know that your life is going to be SO GREAT!!! GOD BLESS YOU AND YOUR SOON TO BE WIFE!!!!

Oh my goodness Shay!! I am sooo happy!! Congratulations!!! I’ll see ya Sunday!!

Hey shay this is vanessa barnes (overholt) from highschool. I just want to say congratulations on you engagement. Marriage is an AWESoME thing God could ever bless us with. Trust me you will enjoy it. I have so far! Im so happy for you and remember keep God in your lives and life will be cake. Later foo

Hey Shay,
This is Charissa Hahn from DCHS.. Just wanted to say congrats on your engagement! Keep serving Him!