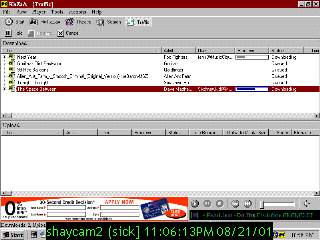 I’m getting pissed. Look at the crap I have been downloading. Those at the right are all video’s. Full length music video’s. it’s a beautiful thing. I love music. Pictures and music?.. doesn’t get much better then that. How do you feel about that? I’m feeling pretty darn good myself.

Have you ever wondered what it’s like to be somewhere and to think what it would be like if you had not have showed up? Like if you were hanging with some friends or something? Because I was at my friend Josh’s last night with a bunch of people (his 2 roommates and a female friend of theirs) and well, I was thinking, “I wonder if, let’s say I didn’t go there, would there not have been as many jokes. Would they have watched more television and started chatting about some news that was being presented?.. I don’t know.. it’s just weird.. ahh whatever.