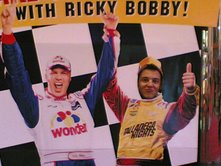 This is me with Ricky Bobby. We took this picture after seeing the movie Cars. It was fantastic. I have no idea who Ricky Bobby is though. I think in some parts of the U.S. people would be upset that I don’t know who he is. The truth is I could probably Google him right now, but I just don’t feel like it.

Speaking of how I feel, I was up all night with a really bad stomach ache. I’m still not feeling so hot. I’m not sure if I got food poisoning at Red Robin or my body couldn’t handle the fact that I went out to eat twice yesterday. It was a good day with friends of eating out and seeing a movie, but when I got home it wasn’t so hot. The details of this don’t need to be explained.

Getting back to Cars The Movie, it was seriously great. The Disney and Pixar combo is genius, it really is. I have yet to be really disappointed by those two. Not to spoil the movie (which what I am about to say won’t), Arnold Schwarzenegger makes a cameo. If you could think of one car that would embody Arnold, what do you think it would be? Well, you’ll have to see the movie to find out what they thought. If I was a car I think I would be a stretched limo. I need something that’s kind of tall, white, and loves lots of people to be around. If I was a limo we could have a party all the time. I would have good music, lots of soda with ice, a sunroof, and even a phone. I would be great. What kind of car would you be?