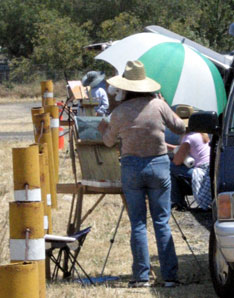 These people were just painting on the side of the road today, it was kind of interesting. It probably has something to do with the upcoming cowboy poetry festival. They hold it annually and it’s kind of crazy. Tons of people come to this thing, but then again.. maybe I’m wrong.

At any rate, I’m about to head to work so I’d figure I’d just write something about a conversation I just had with my roommate. You see, I work for Starbucks Coffee (corporate) and he works for Coffee Kiosk (privately owned). He tried to tell me today that so many people come in and say how much better their coffee is. I take offense to that. I mean, who wouldn’t. There once was a day when Starbucks only had one store. And I asked him if his company went corporate what he would do and he said that he would still put his money into private ownership because he has control over his money. Well, I think that’s lame. He also says that he has more security. Well, I think he’s a little off his rocker. (don’t worry kids, my roommate is a good guy and I’m not coming down on him). This is just a debate we have all the time. It’s kind of fun. He tries these kinds of tricks all the time to make me angry, but he’ll never get the best of me.

But I think that we all know what it really comes down to. He’s just upset that I get full benefits, free coffee, a 401K savings plan, stock options, free drinks, and 30% off any store in the nation. It’s not my fault! I just work for a great company. So at the end of the day, I’ll be at Starbucks.

8 replies on “Corporate Vs. Private Ownership”

Baby, you’re the only one for me, my dream man…For Justin (aka the roomate)…You can Do it!!!

We all know what Jesus would do Shay…He would take the narrow road where few would travel not the wide one where there is a Starbucks on every corner. -your wise Roomate

See you in court.

I think I agree with your roomate. Sorry Shay :(.

PS. Anyone for a Starbucks run tonight? We’ll just say the drinks are on me. I wouldn’t want to continue to burn those hole in your pockets.