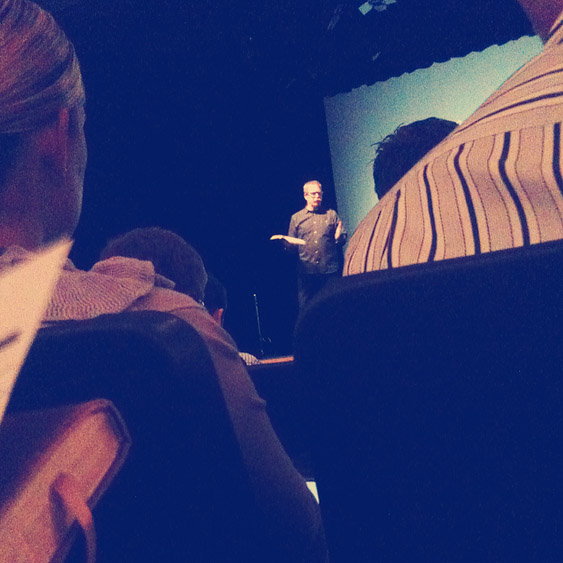 I had the privilege of sitting under the teaching Paul Tripp this past weekend at a conference called “Back to Heart of Parenting”. It was a great reminder about the power of the Gospel in parenting and Paul Tripp is a fountain of wisdom and I praise God for his ministry.

He’s been blogging a bit more lately, which I love, and a blog he published yesterday is just a great reminder about the “10,000 moments” in our lives that mold and shape us. He writes,

…biblical Christianity, which has the Gospel of Jesus Christ at its heart, simply doesn’t rest its hope in big, dramatic moments of change. The fact of the matter is that the transforming work of grace is more of a mundane process than it is a series of a few dramatic events. Personal heart and life change is always a process. And where does that process take place? It takes place where you and I live everyday.

I strongly suggesting following Paul Tripp on Twitter and adding his blog to your RSS Reader.

“All the world’s a screen”. At least that’s what my prof from college argues page after page in his book Meaning At The Movies. He also writes, “God made us in his image, and we make movies in ours”. So true. Sometimes the reason why movies (or television shows) are so entertaining to us is because it’s like looking in a mirror. We see our lives, emotions, thoughts, feelings played out before us and it’s very attractive and revealing about our own hearts. For more on this idea, pick up a copy of Meaning At The Movies, but in the meantime I wanted to show you this clip from a recent episode of The Middle that Bethany and I watched with great laughter and appreciation as it revealed a little bit about the human heart and parenting. If you’ve never seen this show, it’s about a “middle” class family in “middle” America. It’s a classic family sitcom, but it’s narrated from the viewpoint of the mom Franki (Patricia Heaton) to give us an insight in to her feelings and thoughts about being a mom and having a family in “the middle”. Here’s the clip:

The rest of the episode goes on to show just how the parents “take back their lives” in a pretty amusing fashion. The furniture in the living room is rearranged just the way mom wants it. The dad and mom are high-fiving every time they “take back” another portion of their lives, be it the kind of pizza they order, taking a parent’s night out with friends, not dropping everything to cater to any one of their kids specific/immediate needs, etc. Bethany and I were just laughing in agreement as the parents actually start to rule the home and not let the kids run the place. The kids of course are completely taken back that their parents are now saying “no” and their efforts to plead with the parents to go back to the way things were before simply creates hilarity throughout.

It all reminded me of a blog I read just this week from Jay Younts of the Shepherd’s Press blog titled “Go to Sleep!”. It’s a critique of a new book that tries to humorously discuss why kids just won’t “go to sleep” and are annoying their tired and frustrated parents. The problem is, as Jay Younts argues, “Children were never intended to be installed as rulers of the universe…”. And often this is exactly what they are in families today, rulers of their own schedules, bed times, toy selection, and the like. But there’s already a ruler of the universe — his name is Jesus. And when children begin to rule their own universe (e.g. parents, household, etc.), and when parents reinforce this sense of dominion in the child it will only frustrate everyone involved. That’s why we need the Gospel. Without the Gospel, Jesus doesn’t rule in our hearts and stake the claim He rightfully owns (paid for by His shed blood) in our homes, children, and families. What we end up with is a war for authority of which each little battle is often won by the children who finally win the war.

By the end of the episode both parents finally “give in” to one of their child’s needs and basically go back to their old ways. The furniture is rearranged to the way it was, the parents drop everything to meet their children’s needs, etc. Honestly, they needed balance in their approach, but it’s still sad that they couldn’t stay committed to ruling their home as the authority in the kid’s lives. In the final scene, Franki (the mom) goes outside to get the mail and another mom with a toddler in a stroller are walking by. The child is obviously not happy about something and you hear the other mom saying “What is it honey? Whatever you need I’ll get it for you.” Franki quickly approaches the mom and says, “Don’t do it! Don’t give him everything he wants!” It was a last ditch effort to keep her dream alive of helping another mom change her ways before it’s too late! The concerned mom just gives Franki an odd look, helps her child, and keeps walking down the sidewalk. As Franki stands there watching them walk away we hear her say “She won’t listen”, as if to say “It’s a lost cause. In the end, the kids win. Parents lose.” You’re right, Franki. If parents keep letting their kids rule the universe, it’ll be a lost cause to try and rule your home. It’s only when parents see that their children were designed for authority and limits that blessing will come.